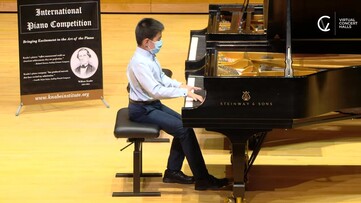 Adam Li has studied with Gregg Pauley since the age five and has performed in public master classes with Ilana Vered and Sasha Starcevich. He has been participating in the piano seminar series at the New England Conservatory Prep School since 2019. Adam won the Grand Prize in the XII Chopin International Piano Competition in Hartford, CT (Online Edition, Junior Category, age 10 and under) in 2021, first prize in the Steinway Piano Competition in Boston, MA (Division I, age 9 and under) in 2019, and first prize in his age group at the Granite State Piano Competition in Concord, NH in 2019. Adam also participated in the audition for the Elite International Music Competition in 2018 and was invited to perform at Carnegie Hall. He has also performed a Christmas Concert in 2018 featuring Tchaikovsky’s Nutcracker Suite in Concord, NH. Adam greatly enjoys playing the piano and feels it to be an outlet to express his feelings and emotion. From it he has gained self-discipline and confidence as well as an enriched imagination. He also has an appreciation for the piano away from the keyboard in the study of the history of western music. 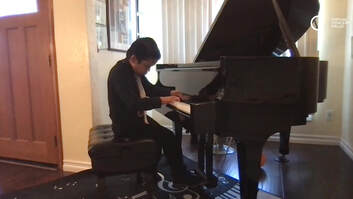 Final Round Performance Piece:
The Cat and the Mouse by Aaron Copland
​​
​Hiroshi has been playing piano since the age of 3. He started piano at the age of 4 and then began competing at the age of 5. In 2021, Hiroshi won 1st place in the Runan International Piano competition, and he has been awarded a few other times. He also won 2nd place in the United States Open Music Competition Show Case piano solo, outstanding gold medalist award in the USOMC, and 1st place in the International Instrumental performance Competition and Silicon Valley Music Competition. Hiroshi enjoys video games, biking, and skateboarding, and can speak both Spanish and Japanese fluently. 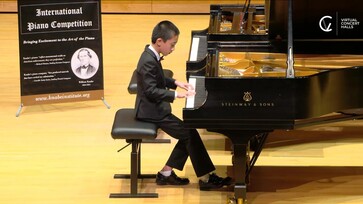 Ethan Zhao is nine-year-old third grader. He has studied piano with Mrs. San-Qing Lu Bennaman since the age of 6.  Ethan is a hardworking and continues to progress. He has competed in many competitions and won several first-place prizes in the past two years.  He won 1st place at MSMTA Spring Festival Piano Solo Competition in year of 2019, and twice 1st place at Rockville Piano competition in year 2018 and 2019.  He also received 3rd prize at the 34th International Young Artists Piano Competition and special prize for the best performance of the Chinese piece in 2019 (age 8 and under).  He won 1st prize at the Washington Universal Piano Competition in 2019 (age 8 and under) and also placed 1st at the YMIC metropolitan music festival competition in 2019. He enjoys playing the piano, which he believes has improved his overall ability to concentrate. Performing has also developed his sense of bravery and courage when facing new challenges. 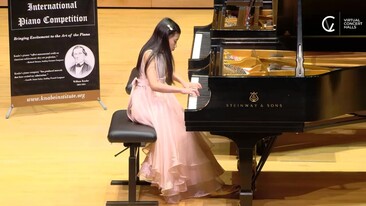 Final Round Performance Piece:
"Doctor Gradus ad Parnassum" from Children's Corner, L. 113, by Claude Debussy
​
​10-year-old Ella Xu has been playing piano since the age of five. She is currently a student of Dr. Jingwen Tu at the Bard College Conservatory of Music Preparatory Division. Ella is the 1st Prize winner of the International Grande Music Competition and the Crescendo International Music Competition, the 2nd Prize winner of the Camerata Artists International Competition, and the Third Prize winner of the Chopin International Piano Competition (Hartford, CT) . Among her abundant musical experiences, she has played in the Bard College Conservatory Celebrating György Kurtág Concert and many Bard Prep’s Honor Recitals. She has played in the Carnegie Hall’s Weill Recital Hall and the DiMenna Center for Classical Music. Ella also plays the oboe. She is a member of the Bonis chamber group at Bard Prep. She enjoys sharing her love for music with people. In addition to music, Ella loves reading, coding, speed cubing, and biking.