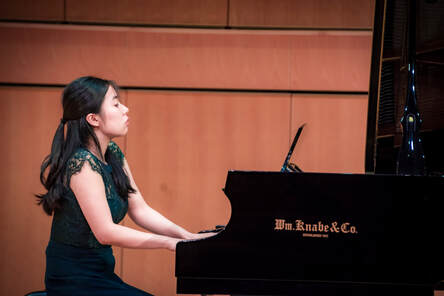 Final Round Performance Pieces:
Sonata in B Minor, HOB: IXI/32, by Joseph Haydn
Nocturne in B Major, Op. 62, No. 1 by Frédéric Chopin
Sonata No. 6 in A Major, mvt. 4 (Vivace) by Sergei Prokofiev

​Born in Sydney, Australia, Jane Liu began studying music at a young age. Jane is currently pursuing a dual Master’s Degree in Solo Piano Performance and Collaborative Piano at the Cleveland Institute of Music.  She is a prizewinner of many competitions including the 2016 Kawai Music Competition, 2018 Thousand Islands International Piano Competition, 2017 Master of Sonata Piano Competition, Art of Piano Competition, Sydney International Music Festival and the ENKOR competition. She is currently a finalist for Australian Youth Classical Music Awards and the American Prize in Solo Performance. Her performances have been broadcasted on Fine Music 102.5 FM, WCLV 104.9FM and WRUW 91.1 FM . At summer festivals, she has studied with Robert McDonald, Jerome Lowenthal, John Perry, Matti Raekallio, Natalya Antonova, Alexander Gavrylyuk, Boris Slutsky, Ronan O’Hora, Benjamin Pasternack, and Kathryn Selby. Playing music in a solo or collaborative setting has provided Jane with opportunities to meet inspiring musicians from different countries, different walks of life, and has helped her realize the necessity of art and music in the world. 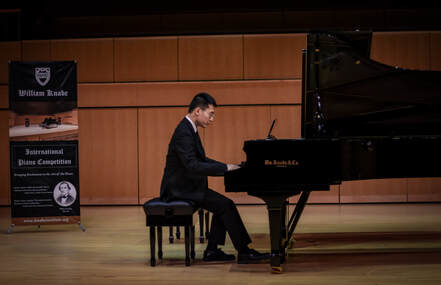 William studies at the Indiana University Jacobs School of Music as a recipient of the Premiere Young Artist Award under the tutelage of Evelyne Brancart.  He began piano studies with Olga Radosavljevich at the Cleveland Institute of Music and continued studies with Andrey Ponochevny and Pamela Paul at the UNT College of Music.  William has performed as soloist with the IU Student Orchestra, Plano Symphony and Lewisville Lake Symphony, and has received prizes at the Chopin International Young Artist Competition (Houston), International Keyboard Odyssiad, and Hellam Young Artists Competition.  In 2014, he was awarded the title of Texas Young Master in the Arts and has attended summer festivals such as Brevard, Orford, Dublin International, Texas State International, and Art of the Piano in Cincinnati.  While at IU, he has been involved in the chamber music program, collaborative piano and orchestral programs. 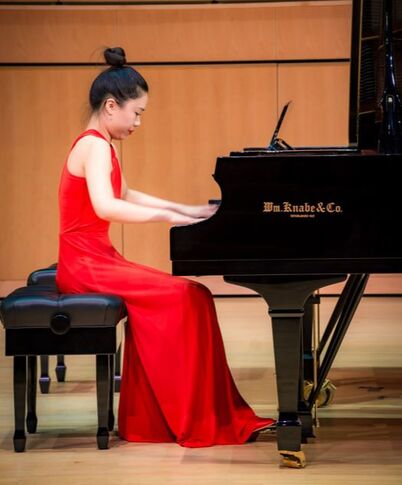 ​​Gabrielle Hsu studies Piano Performance at the New England Conservatory of Music under the tutelage of Victor Rosenbaum as a recipient of Ruth M. Bernard Scholarship. She made her orchestral debut at age 10 and has performed in Weill Hall of Carnegie Hall and Steinway Hall New York multiple times as a laureate of various youth competitions. She is a two-time winner of Northern Lights Concert Competition and Silver Medalist of Bravura Philharmonic Concerto Competition, and has received First Prizes and other top honors from the National YoungArts, Hartford International Chopin Competition, Bradshaw & Buono International Competition, MTNA Senior and Junior Piano Performance Competitions, among many others.  In 2016, Gabrielle was invited to Poland as a featured performer in the World Piano Talents concert series of the XXII International Chopin Festival and the IX Chopin Festival in Kurozweki Palace. In addition to Aspen Music Festival where she studied with Professors Arie Vardi and Hung-kuan Chen, Gabrielle had performed in master classes of Alexander Kobrin, Massimiliano Ferrati, Claire Huangci, Nina Lelchuk, Magdalena Baczewska, and Yuan Sheng during her participation in the International Keyboard Institute and Festival, and Krystian Tkaczewski in Poland. 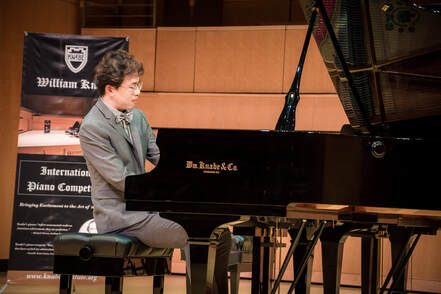 Young pianist Alan Xuesong Lin is known for his enthusiastic, imaginary and intelligent performing. He has performed from China to United States, including venues such as Shanghai Concert Hall, Auer Hall in Indiana University and Snow Fine Arts Recital Hall in Arkansas. Mr. Lin started piano at the age eleven and made his debut in his hometown Tongling, China, performing the Yellow River Concerto after only two years of study. He has had the honor to work with many influential musicians including Edward Auer, Anton Nel, Michele Campanella, Alexandre Moutouzkine, Eteri Andjaparidze and Leon Fleisher. He is currently pursuing his master’s degree at the Peabody Conservatory under the tutelage of Ellen Mack. His major instructors also include Su Bin and Neil Rutman.