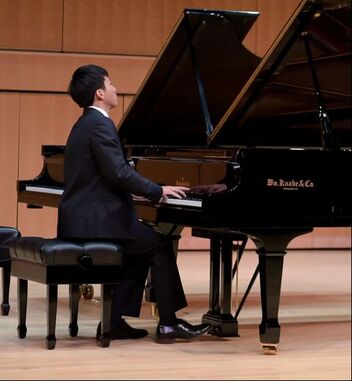 Final Round Performance Pieces:
Toccata from Partita No. 6 in E Minor, BWV 830 by Johann Sebastian Bach

​Trung Nguyen, a homeschooled sophomore from Leesburg, Virginia, has been playing the piano for nine years and is a student of Dr. Marjorie Lee.  He previously studied with Dr. Scott Beard and Faye Bonner. Trung has taken home prizes in many competitions including the NVMTA Bach Baroque Competition, International Young Artist Piano Competition, the WMTA Bartok Competition, and the Hayes School of Music Piano Competition.  In 2017, he represented West Virginia in the Junior Category at the MTNA Eastern Division in Boston, Massachusetts.  Most recently, he was awarded at the NVMTA Northern st prize at the Districts Auditions, WMTA Viola Hartman competition, Bi-annual French Music Competition, Tselentis-Bach Competition, and was the Alternate of the District of Columbia MTNA Senior State Competition and the MSMTA Gertrude Brown Concerto Competition.  In addition, he has performed at the Hungarian Embassy in Washington, DC and the Washington International Piano Festival. As a performer, Trung has played the Haydn Piano Concerto in D Major with the Shepherd Orchestra.  Music is an important part of his life because it allows him to engage in and form lasting relationships with people around him.  In addition to music, Trung is an accomplished chess player and fisherman. 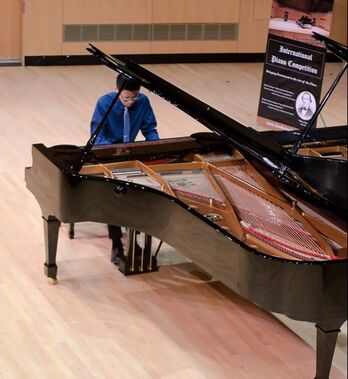 Final Round Performance Pieces:
Piano Sonata Op. 1 by Alban Berg
Etude in A minor Op. 25, No. 11 by Frédéric Chopin

Alan Mao, 16, is a sophomore at Towson High School. He has been studying piano with Dr. Hyun-Sook Park for 11 years, and is a member of the Piano Academy at the Peabody Preparatory. At the Preparatory, Alan has enjoyed performing in the Honors Recitals, Vella Silver Recital series, and the Lynn Hebden Taylor Part Recitals. As a soloist, he has placed 1st in the Miriam S. Gottlieb Memorial Piano Competition (2013, 2016, 2018) and the Gertrude S. Brown Piano Concerto Competition (2013, 2017). In 2015, Alan received 1st prize at the VI Chopin International Piano Competition. Last year, his chamber group Trio Spielen, with violinist Connor Chaikowsky and cellist Caleb Park, won the Misbin Competition organized by Levine Music and Washington Performing Arts Society. Over the years, piano has gained importance as an expressive outlet for Alan, allowing him to dive into greater musical projects such as Music For A Cause and Tri-M Honor Society. It is a passion that he will continue to pursue in the future and a joy that he hopes to spread to all those who listen. 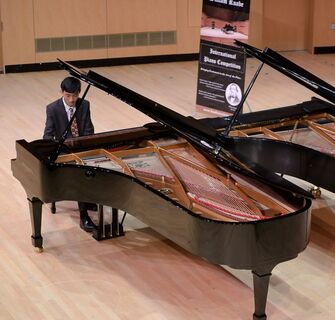 Final Round Performance Piece:
Soiree Dans Grenade from Estampes, L. 100, No. 2 by Claude Debussy
Sonata in E-Flat Minor, Movement IV. Fuga, Op. 26, Samuel Barber
​​
​​Fourteen-year-old Tan Nguyen has been playing the piano for eight years and is a student of Dr. Marjorie Lee.  Music is very important to him because it challenges his mind and allows him to freely express himself.  He was a named a 1st prize winner numerous including of the Northern Virginia Music Teachers Association’s (NVMTA) District Auditions, the Rockville Competition for Piano and Strings, the Washington DC Music Teachers Association (WMTA) Tselentis Bach Competition, the Viola Hartman Competition, the Home Educators of Virginia Music Competition, and also the MTNA District of Columbia State Division Junior Competition.  As a performer he has played the Saint-Saëns Piano Concerto No. 2 with the Capital City Symphony.  When he isn’t practicing Tan loves bass fishing and playing basketball. 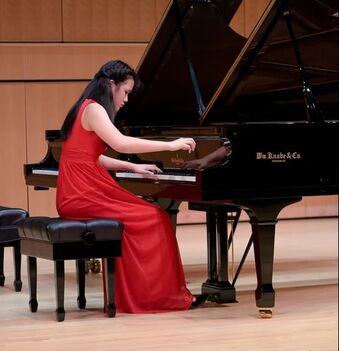 Final Round Performance Piece:
Ballade No. 1 in G minor, Op. 23, by Frédéric Chopin
Prelude No. 2 in B-flat major, Op. 23, by Sergei Rachmaninoff

Madison Yan is a 10th grade student at Dreyfoos High School of the Arts, majoring in Piano. She started studying piano at the age of five. Madison began her studies with Dr. Irena Kofman and has studied with Prof. Kevin P. Kenner since 2016. Since 2014.Madison has won numerous awards from local events, state, and international competitions. She taken home 1st prize numerous times including the Florida Federation Music Club concerto competition four years in a row, and in its senior division in, Florida State Music Teachers Association Concerto Competition Junior Division. As a performer she made her orchestra debut was in with Great Miami Youth Symphony as has also performed Beethoven Concerto No. 5 with Alhambra Orchestra. In addition, she is actively involved in local community events and plays piano for fundraiser or senior communities.