​Ella has studied piano with Dr. Svetlana Volkova since September 2017. She has participated in several city, county, and state level competitions, music festivals, and piano recitals, having several first place prizes under her belt. Ella is passionate about playing piano and has shown great understanding for her age with mature interpretation and shaping of melody. 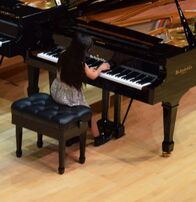 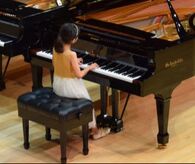 Final Round Performance Piece:
Waltz in B Minor, Op. 69 No. 2 by Fédéric Chopin

Aria McCloskey is a nine-year old fourth grader at Stoneleigh Elementary School in Baltimore, Maryland. She has been studying piano with Dr. Seungmin Paik since she was five years old. Aria placed first at the 33rd International Young Artist Piano Competition in Washington, D.C. and had the honor of performing at the Kennedy Center. She has also won awards at the Maryland State Music Teachers Association Spring Festival and the Miriam Shields Gottlieb Memorial Piano Competition. Music allows Aria to channel her energy into something “creative and rewarding,” and she loves to perform for others. In addition to learning piano, she also studies cello with Bai Chi Chen and plays the double tenor drum in her school’s steel drum band. Aria’s favorite composer is J.S. Bach. Her other interests include reading, science, birdwatching, chess, filmmaking, and writing stories. 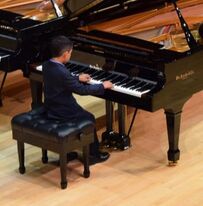 Final Round Performance Piece:
Sonatina in F Major Anh. 5, No. 2, by Ludwig van Beethoven
​
​Izel has been surrounded by music since he was born. He started discovering melodies from the songs he sang with his mother at the piano when he was two years old. He started taking Piano lessons with his mentor Ludmila Melzer when he turned four. Izel was awarded first prize at the International Online Piano Competition in Belgrade, Serbia in 2017 and second prize at the International Concerto Competition in the American Fine Arts Festival in 2018.  He was part of the Teatro al Mediodia at the National Theater in Costa Rica in 2017.  He has presented his talents in halls such as Eugene O'Neill, Auditorium Clodomiro Picado, Sala Richter, and the Weill Hall in Carnegie Hall.