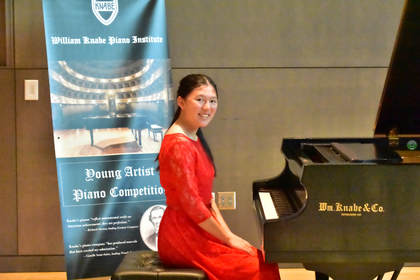 ​Emily Quan has been studying under Dr. Marjorie Lee since the age of five. She is currently a sixteen-year old junior at Thomas Jefferson High School for Science and Technology. She was recently named a semi-finalist in the Kaufman International Youth Competition, and will be competing later this season.  This year, she was the Virginia state winner of the Music Teachers National Association Virginia Senior Piano Competition, and was alternate in the Southern Division competition. She has also won awards at local and regional competitions; most recently, she was the winner of the Northern Virginia Music Teachers Association Achievement Award Competition in her level.  She has performed at a multitude of venues in the United States and Asia, including the Hungarian Embassy in Washington, DC and the American Embassy in Beijing, China.  Her passion for piano has led her to a greater appreciation of music and increased perspective.  In addition to solo performances, she enjoys performing in chamber ensembles and piano duets, and has accompanied various choral ensembles. 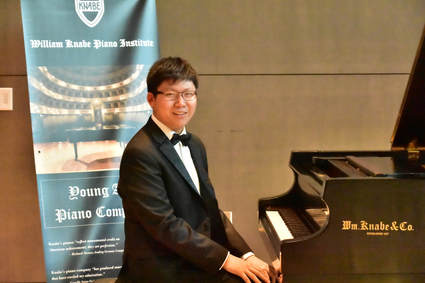 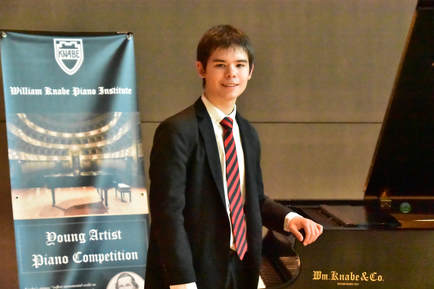 Final Round Performance Piece: Sonata in B-flat Major, Op. 22 (I. Allegro con brio) Ludwig van Beethoven
​​
​​Christopher Papenfuss is a sixteen-year old homeschooled tenth grader in Fairfax County, Virginia. He has been studying the piano for more than ten years and is in his fifth year as a student of Dr. James Litzelman; previously, he studied under Dr. Yoshinori Hosaka and Mrs. Alice Quan.

He has played for the Young Artist Musicale at the George Mason University Performing Arts Center and for the Piano Prodigy Series at the Department of State. He was chosen to perform in Master Classes with Simone Dinnerstein (2017), Dr. Edmund Battersby (2015), and Barbara Nissman (2013); and appeared as a featured performer for the Music Friends Concerts at the Alden in March 2015.

Christopher frequently plays the piano in his church for congregational singing, accompanying other instruments, and with choirs. He has played at several assisted living centers in Northern Virginia and particularly enjoys the opportunity to perform in those settings. 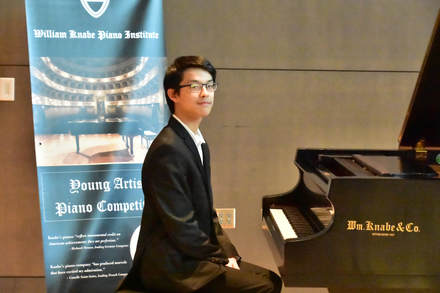 ​Evan Hu is an eighth grader at Thomas W. Pyle MS. He has studied with Dr. Marjorie Lee for seven years. Some recent awards include first place at the Protégé International Competition of Romantic Music 2015 and first place at the Gertrude S. Brown Memorial Piano Concerto Competition. He has played in many venues, such as the Kennedy Center and Weill Recital Hall in Carnegie Hall. Evan enjoys playing basketball and competing in math competitions in his free time. He has spent every Saturday playing piano for patients in hospitals and senior homes. It is through activities like these that Evan has come to understand that being a good pianist is for others, not for himself.

​Michelle Tang, age fifteen, has played piano for eight years. She currently studies with Ms. Katerina Zaitseva. She is a ninth grader at the Magnet Program at Blair High School.  She has performed at the Department of State, Kennedy Center Millennium Stage and at Carnegie Weill Recital Hall. Michelle has been a prize winner at numerous competitions, including The Viola Hartman Piano, Miriam Shields Gottlieb Memorial Piano Competition, International Young Artist Piano Competition, and the AAMS International Competition.  Michelle won first place in the Doris and Larry Chase Sonata Award (Beethoven sonata) and first place in The Ylda Novik Memorial Concerto Competition (junior group). She has performed with the Washington Conservatory Orchestra as the winner of the Brown Piano Concerto Competition, has performed on the Kennedy Center's Millennium Stage as the winner of AAMS, and has performed in the Washington International Piano Festival as the winner of IYAPC. Michelle is the Maryland winner for 2014-2015, Maryland alternate for 2015-2016, and the Maryland winner in 2016-17 of the Music Teachers National Association (MTNA) junior piano performance competition.