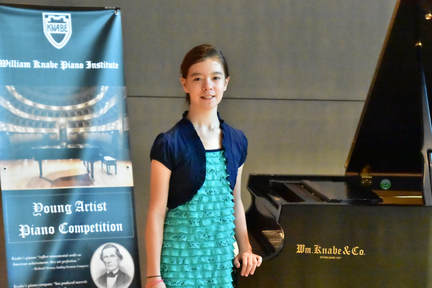 Nicole Papenfuss is a twelve-year old homeschooled 6th grader in Fairfax County, Virginia  She has been studying the piano since the age of five. She currently studies with Ms. Silva Blazquez and previously studied with Ms. Debra Gunnarson. 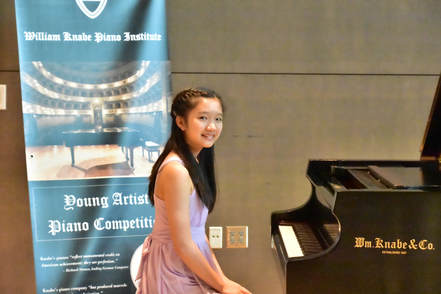 Final Round Performance Piece: Impromptu in F Minor, Op. 31, No. 2 by Gabriel Fauré

Raelyn Hoang, age eleven, is a fifth grader at Buffalo Trail Elementary School in Loudoun County, VA.  She has been playing piano for six years and is a student of Silva Blazquez.  Raelyn has competed in numerous competitions sponsored by Northern Virginia Music Teachers Association (NVMTA) and Washington Music Teachers Association (WMTA) and has won many awards.  In addition, Raelyn was a first prize winner of the 27th and 28th Annual Harold Protsman Classical Period Piano Competition, second prize winner of the Asian American Music Society Competition, and third prize winner of the VII Chopin International Piano Competition.  Raelyn loves to perform in public, and she has performed at the Weil Recital Hall at Carnegie Hall in New York, Young Artist Musciale at the Center of the Performing Arts at George Mason University, and many Honors Recitals she has won a place in through NVMTA and WMTA competitions.  Recently, Raelyn was selected as a young soloist at the Alden Auditions and will be performing next year at the Alden Theater in McClean, VA.

Piano has impacted Raelyn's life in many positive ways.  It allows her to express her thoughts and feelings through music.  It also allows her to share her interpretations of many composers with her family, friends and others.  Through music, Raelyn has developed self-confidence, responsibility, determination, and time management. 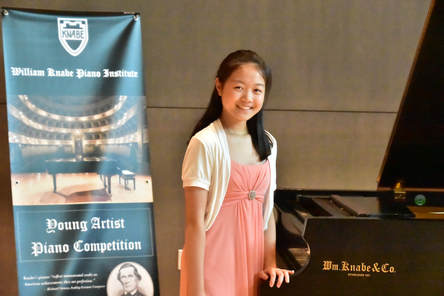 Final Round Performance Piece: Basso Ostinato by Rodion Shchedrin
​
​​Melissa Wu is twelve years old and a seventh grader. She started playing piano at the age of four and has been studying with Lisa Emenheiser Sarratt since the summer of 2014.  Melissa greatly enjoys her lessons with Mrs. Sarratt. She loves playing piano and competes in many piano competitions. At the Lions of Virginia James Bland Competition, Melissa reached the final State level, where she won second place and $2000. Melissa was also a second place winner at the 2016 Northern Virginia Music Teachers Association District Auditions. She also competed in the Young Musicians Inspiring Change Competition, in which she placed third.  Melissa was first prizewinner in the 2015 Northern Virginia Music Teachers Association State Auditions. Additionally, she was second prize winner in the Asian American Music Society International Competition.  Aside from piano, Melissa participates in other activities such as cello, math, swimming, and Chinese school. 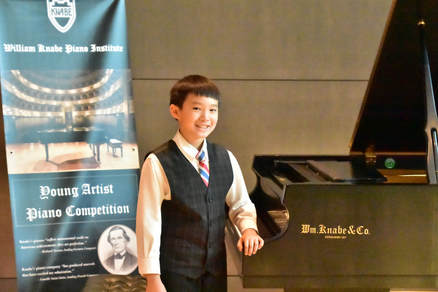 Final Round Performance Piece: Variations on a Theme by Paganini by Isaak Berkovich
​
Starting from a young age in Victoria, Canada, Michael has excelled in piano since he was six. Beginning to compete in first grade, Michael has won numerous awards in Canada, such as the Baroque and Romantic class awards. In his last year before moving to the US, Michael won the "Most Outstanding Junior Performance" award, and went on to perform with the Sidney Classical Orchestra. After moving to Maryland while in third grade, Michael has continued to excel in piano. Here in Maryland, Michael takes piano lessons with Dr. Bok Hwa Kim, and he has won first place in several competitions, such as the Miriam Thomann Competition, and the Maryland State Spring Festival Piano Solo Competition. In addition to this, Michael takes piano very seriously and cannot imagine his life otherwise. Without piano, Michael would not have any idea of what goals he would have in life, and that's why piano impacts Michael's life so greatly.​ 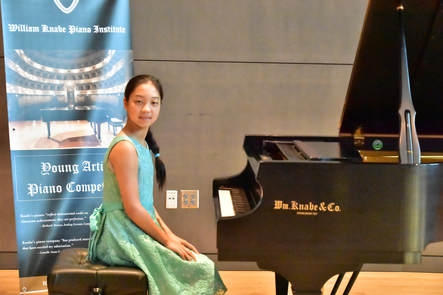 Final Round Performance Piece: Sonata in E Major, Hob. XVI:22 (II. Andante) by Franz Joseph Haydn
​
Joanna Cheng, age twelve, is a seventh grader. This is her eighth year studying piano with Dr. Marjorie Lee. She was the first prize winner for the 11-12 age group of the 30th International Young Artist Piano Competition in 2015 and performed in the winner's concert at Kennedy Center for the Performing Arts Millennium stage. She was the Virginia State winner of the 2016 Music Teacher National Association (MTNA) Junior piano competition and received Honorable Mention at the MTNA Southern Division competition in Tampa, FL representing Virginia. She feels that piano is a big part of her life and that she really appreciates music and the way it makes her feel. ​ 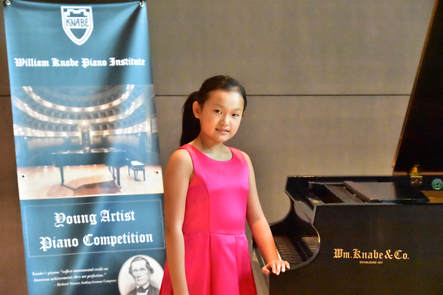 Final Round Performance Piece: Fireflies, Op. 15 by Amy Beach
​
Tongtong is a sixth grader at the Takoma Park middle school in Maryland. She started playing piano at the age of five and currently studies with Dr. Marjorie Lee. She has won many awards, including  first place at the Maryland State Music Teachers Association (MSMTA) Spring Festival Piano Solo competition, second place in the 2015 competition, and first place in the 2016 Washington Music Teachers Association (WMTA) Viola Hartman piano competition.  She also won the first place award at the 2016 Asian American Music Society International Piano Competition and the first place award in the WMTA Bartok Piano Competition.  She has received honor awards at both WMTA and Northern Virginia Music Teachers Association (NVMTA) judged recitals and has been invited to perform at the Millennium stage in the Kennedy Center, the Hungarian embassy, and the Alden theatre. Years of piano study have not only helped Tongtong to appreciate the beauty of music, but have also taught her the correct attitude to take when facing big challenges.

​About her piano studies, Tongtong says, "Playing music has become an integral part of my life as it is so much fun to play beautiful masterpieces!"​