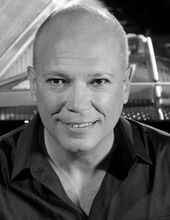 Jose Ramos Santana's much lauded guest appearance with the American Composers Orchestra at Carnegie Hall during the Sonidos de las Americas Festival was his third Carnegie Hall performance in one year. Mr. Ramos Santana has also performed at Zankel Hall and the Weill Recital Hall under the auspices of La Gesse Foundation.

His recital work has taken him to major venues throughout the United States, France, Germany, Italy, Switzerland, Spain, Central America, and the Far East. And he has been featured in documentaries on the PBS network, A&E channel and CBS Sunday Morning.

Jose Ramos Santana is also an established recording artist. His world premiere of "Glosas" by Roberto Sierra on the Fleur de Son Label received critical acclaim. His collaboration with the Royal Philharmonic Orchestra also includes recordings of Ravel's Piano Concerto in G and Saint- Saens Piano Concerto in G minor op. 22 He has also recorded the complete works for piano and violin by the Spanish Catalonian composer Xavier Montsalvage with violinist Eva Leon on the Naxos Label.

Jose Ramos Santana is a graduate of the Juilliard School where he studied with Adele Marcus, William Masselos and Sylvia Rabinof. He has also coached with Leon Fleisher and Alicia de Larrocha.
He is a member of the piano faculty at New York University Steinhardt School and teaches at the Levine School of Music in Washington, D.C.

Jose Ramos Santana is the founder and artistic director of the Puerto Rico International Piano Festival.
Back