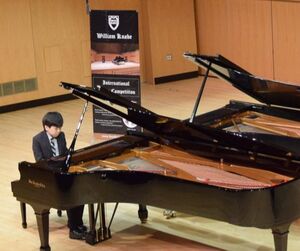 Final Round Performance Piece:
Variations Brillantes, Op. 12, by Frédéric Chopin
​
Arthur, a 7th grader, has been studying piano with Dr. Marjorie Lee for two years. He has performed solo recitals and has won several awards including First Place in the 2014, 2015, and 2016 Virginia Music Teachers Association (VMTA) Central District Auditions. He is a two-time 1st Place winner of the Harold Protsman Classical Period Piano Competition held in Norfolk, including the 2016 Helen and Warren Aleck Award for the Most Promising Performance.  He has also won 1st place in the Richmond Music Teachers Association 2016 Bach Competition and the Young Musicians Inspiring Change (YMIC) 2016 Piano Solo Competition held in Maryland and placed 1st in several other notable competition. When away from the keyboard Arthur loves to read and play video games, as well as soccer, basketball, and swimming.

Michael has been excelling at piano since he started at the age of six. A student of Dr. Bok Hwa Kim since 2015, Michael has been a 1st prize winner in various competitions, including the 2016 and 2018 Gertrude Brown Competition, the 2017 Miriam S. Gottlieb Competition, and the 2017 Doris and Larry Chase Sonata Competition. He has also been awarded top placements in the 2017 and 2018 YMIC International Competition, and the 2017 and 2018 Knabe Young Artist Competition. Michael cannot imagine his life without piano, as it provides Michael with goals that he wants to accomplish, and ultimately, piano has given Michael motivation to improve himself every day. 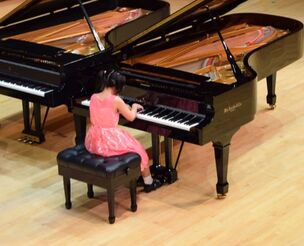 Final Round Performance Piece:
Le Tombeau de Couperin, I. Prelude by Maurice Ravel
​​
Twelve-year-old Sophia, a 6th grader, has been studying piano with Dr. Marjorie Lee for 6 years. Sophia has won many national and international competitions, the most recent being the 2019 Robert Spencer Concerto Competition, where she was selected by judges to perform with the Amadeus Orchestra on May 19, 2019. She has won 1st place honors several times, including for the Virginia State Audition, 2018 Ylda Novik Memorial Concerto Competition, and she is even set to compete at the 3rd Lang Lang Shenzhen Futian International Piano Festival. She is an active young artist voluntarily performing in many community centers, including the National Institute of Health’s hospitals in the DMV area. She has been sponsored by the Tacy Foundation has even done recordings. When away from the keyboard she loves reading and excels in Math. She is national Math Competition Gold Medalist and Davidson Young Scholar. 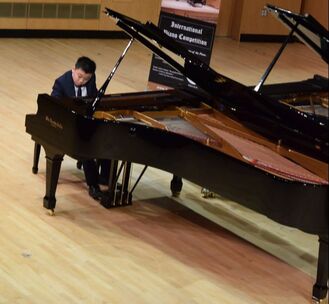 Final Round Performance Piece:
Étude Op. 10, No. 8, by Frédéric Chopin 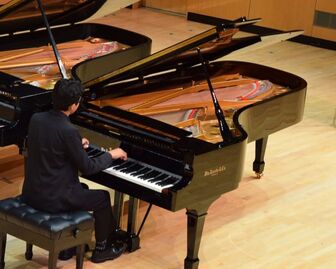 Final Round Performance Piece:
Sonata No. 6, Op. 10 No. 2, I. Allegro, by Ludwig van Beethoven

​Oscar Paz-Suaznabar is 13 year-old student at Saint Albans School in Washington, D.C. He had studied with Dr. Marjorie Lee since he was six. In 2012, he received the Jack Kent Cooke $10,000 Young Artist Scholarship. He has earned numerous awards, including: First Prize, 2015 Kaufman International Youth Competition and Grand Prix, 2016 VII Chopin International Competition. He has also won awards in regional competitions including Washington and Northern Virginia Music Teachers Associations, Maryland State Music Teachers Association, and Music Teachers National Association (MTNA). In 2016 and 2018, he won the Asian American Music Society’s Junior Competition in Washington, D.C. and Steinway & Sons Washington Competition. Oscar credits the dedication and time management skills developed through piano practice for not only improving his musical studies, but also for improving his academic performance and helping him become more responsible. When he isn’t practicing, Oscar enjoys reading and cycling. 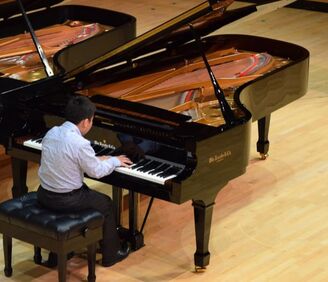 Final Round Performance Piece:
Sonatine, I. Modéré, by Maurice Ravel
​
Felix Xu is currently a 4th grader at Colvin Run Elementary school where he is a very active and outgoing personality. Felix has had an interest from a very young age and has been studying piano with Ms. Margarita Gramaticova since the age of five. Felix has won a number of prizes in the past few years.  He recently won the first place in the Virginia State Piano Audition. In addition to his love of music, Felix likes reading, tennis and skiing.